And not just because they blocked you? 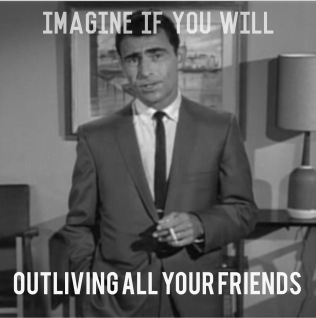 I don’t suppose any one of us reading this have visited that Twilight Zone. But a photo sent recently from the son of Dad’s very best buddy started haunting me. For me, this is what nightmares are made of. 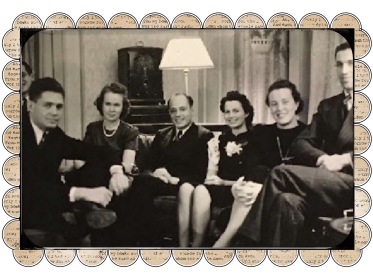 No, I’m not talking about wearing a lampshade on or over your head at the party. That’s a good dream in my book. I’m talking about being the last one standing. Roscoe Nelson, Dad’s best friend, is on the far left. Dad is in the middle. I don’t know the others because this was back before Roscoe and Dad were both married, but I think it’s taken prior to a dance at BYU. This year Roscoe’s family is celebrating what would have been his 100th birthday. Unfortunately, Roscoe passed away in 1960. And I’d bet the family farm, if we had one, that everyone else in this picture has passed on too, except for dear old Dad. My dad has such fond memories of Roscoe that when he reminisces about college and missions and WW2, Roscoe’s name usually surfaces. And for what it’s worth, I was named after Roscoe’s wife, Joyce.

Of course, over the years, new friends and memories are made. My folks were in a fabulous Great Books group for at least 50 years. They also belonged to dinner groups and that fancy Debonaire’s Dance Group. But all of those original members are gone, also.

So here’s my thought. If you happen to have the opportunity to sit with someone who is 85 or 90 or maybe even older, ask them about their friends. Who did they run around with as a kid? What did they do together for fun in high school and college? What personality trait did they most admire among their friendships? And what is that magical, often elusive “something” that forms Best Friends Forever?

And then think about becoming their friend. I bet they would like one…more.

Trying to do good and have fun at the same time. I'm a Christian mother, grandmother, sister, aunt and friend helping others who may need a voice and a helping hand. View all posts by 1joysea